The "Global Adult Tobacco Survey 2016-17" says that tobacco smoking is a major preventable risk factor for a number of causes of death. In India, 10.7 per cent adults smoked daily in 2010 and it remains so even in 2016. When measuring the exposure of second-hand smoke in households, women are at a higher risk (39.3 per cent) in comparison to men (38.1 per cent) but unfortunately our policies remain passive on this issue.
With the dismal condition of healthcare in India, the provisions for healthcare are even worse when it comes to women-specific diseases. Generally, women's health receives attention only during pregnancy; this comes from our patriarchal understanding of women's role in society.
Cardiovascular disease, stroke, kidney disease, respiratory diseases and trauma are major causes of death for women worldwide. The health profile of India by WHO reveals that women have a higher life expectancy in comparison to men, but this is marred by disorders like musculoskeletal diseases, depression, etc. Social structures and prejudices also create an environment in which women's health and well-being are further compromised.
Due to a lack of disease-specific data on gender differences, there is a complete absence of evidence about preventive care for women, along with issues like increased consumption of tobacco, alcohol and drugs. Gender disparities have also crept into healthcare delivery and women's access to treatment.
Traditionally, much of the work done by women is performed within the context of the family. As women move beyond their traditional occupations in today's era, they meet new health hazards which add to the existing occupational hazards.
Globally, psychological violence at work, especially bullying, violence, mobbing and harassment (including sexual harassment) are reported to be major concerns for women. Many studies show that women are at particular risk of physical and psychological violence both in and outside the workplace. But this is rarely considered under the banner of occupational safety and health. Appropriate indicators must be established when examining compensation for work accidents and injuries in such cases.
As a result of the neglect of women's occupational injuries, women are reported to be at much lower risk of occupational injuries and accidents. For instance, till recently, deteriorating respiratory health due to pollution from household cooking was not considered an occupational health issue. Whatever little data is available on women's occupational health and safety issues is mostly aggregated and this ignores many important aspects of women's health profiles.
A UN study of 31 countries shows women are working 10 to 30 per cent more hours than men and that two-thirds of women's work is unpaid, unvalued and invisible. Yet our national health programmes fail to address health issues pertinent to women.
Low participation rate of women in the labour market is also attributed to uncertain occupational health and safety. Thus, there is a high urgency for a comprehensive plan for women's health whether in the workplace, household, or other spheres.
(Moulshri Kanodia, German Chancellor Fellow at Alexander von Humboldt Stiftung (Foundation), &amp; Researcher at Harriet Taylor Mill Institute, Berlin School of Economics and Law. The views expressed are personal)

Let Me Grow Up! The Devastating Impact of Child Marriage on Girls

How can India improve her Happiness Quotient? 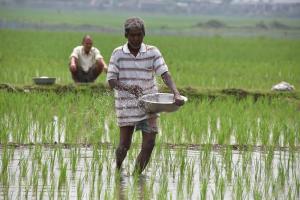 Why are India's farmers committing suicide?

1 year 6 months ago / by shashank trivedi