"Much of what is in the air in India now is pure terror, in Kashmir, in other places," Pakistan's Permanent Representative Maleeha Lodhi on Saturday evening quoted a statement made by Roy.

Delving into Indian politics, Lodhi also borrowed the standard lines of a section of Indian secularists who describe Prime Minister Narendra and his government as "fascist" and Uttar Pradesh Chief Minister Yogi Adityanath as a "fanatic".

Usually a junior or mid-level diplomat delivers the rejoinders, but in a sign of how much it regards the impact of Swaraj's speech, Pakistan took the unusual step of sending its permanent representative - one of the the senior-most officials in its diplomatic corps - to exercise its right of reply.

In her address earlier in the day, Swaraj said Pakistan was only interested in fighting India and sponsoring state terrorism.

Lodhi repeated the secularist line in India that "a racist and fascist ideology is firmly embedded in Modi's government and that its leadership is drawn from the RSS (Rashtriya Swayamsevak Sangh) which is accused of assassinating Mahatma Gandhi".

She slammed Adityanath's election to head Uttar Pradesh, saying "the government has appointed a fanatic as the Chief Minister of India's largest state".

"It is a government, which has allowed the lynching of Muslims," Lodhi said.

She went on to quote from Roy's November 2015 statement: "These horrific murders are only a symptom. Life is hell for the living too. Whole populations of Dalits, Adivasis, Muslims, and Christians are being forced to live in terror, unsure of when and from where the assault would come." 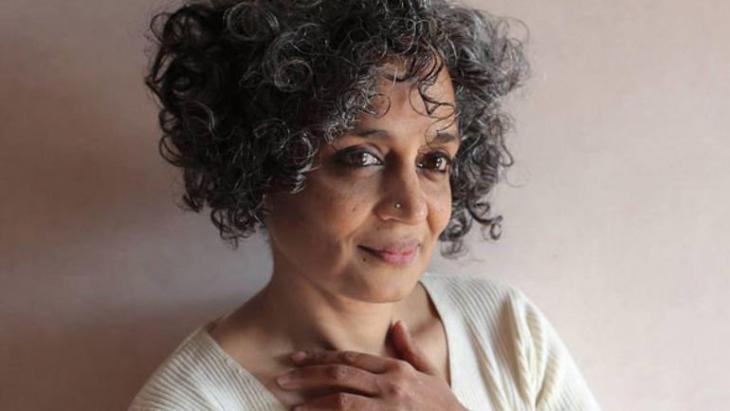 Roy, who won the 1997 Booker Prize for her novel, "The God of Small Things", recently published her second novel, "The Ministry of Utmost Happiness", which unlike her first is political.

Lodhi said Pakistan remained open to resuming a comprehensive dialogue with India but it should include Kashmir and end what she claimed was a "campaign of subversion and state-sponsored terrorism".

(Arul Louis can be reached at arul.l@ians.in)