United Nations, Sep 23, Denouncing Pakistan as the "world's greatest exporter of havoc, death and inhumanity", Indian External Affairs Minister Sushma Swaraj accused Islamabad of being "only engaged in fighting us" and rejecting peace and dialogue.

Speaking at the high-level session of the General Assembly on Saturday, she accused Pakistan's leadership of spurning the hand of friendship, choosing instead to fight and sponsor terrorism.

It was a speech marked by fiery remarks, responding the unusually virulent attacks by Pakistan Prime Minister Shahid Khaqan Abbasi on Thursday.

Prime Minister Narendra Modi tweeted his praise: "Incredible speech by EAM @SushmaSwaraj at the @UN! She has made India extremely proud at the world stage."

India had offered the hand of friendship and agreed to bilateral dialogue, but "Pakistan is responsible for the aborting that peace process," Sushma Swaraj said.

She contrasted India's development, including under previous governments, with Pakistan's descent into a "factory of terrorism" as a lesson for Islamabad's leadership for whom "the wisest thing" would be introspection.

She resorted to ridicule to deflate Abbasi's accusations made against India on Thursday calling him a "champion of hypocrisy."

"He accused India of state-sponsored terrorism, and of violating human rights," she said. "Those listening had only one observation: 'Look who's talking!'"

That remark was met with scattered laughter.

"A country that has been the world's greatest exporter of havoc, death and inhumanity became a champion of hypocrisy by preaching about humanity from this podium," she said raising her voice with indignation.

"Abbasi wasted rather too much of his speech in making accusations against us," she said. More than a third of his address was about India.

"If Pakistan had spent on its development what it has spent on developing terror, both Pakistan and the world would be safer and better-off today," she said.

She compared the progress made by India and Pakistan, whose births in August 1947, were separated only by hours.

"Why is it that today India is a recognised IT superpower in the world, and Pakistan is recognised only as the pre-eminent export factory for terror.

"India has risen despite being the principal destination of Pakistan's nefarious export of terrorism," she said.

The other contrast between New Delhi and Islamabad was democracy, with Pakistan under the yoke of military rule or dominance.

"There have been many governments under many parties during 70 years of Indian freedom, for we have been a sustained democracy," she said.

In a compliment to previous governments that included the almost 60-year rule by the Congress, she declared: "Every government has done its bit for India's development. We have marched ahead, consistently, without pause, in education, health and across the range of human welfare."

The Jan Dhan banking programme for the poor had opened bank accounts to 300 million Indians, a number about the size of the US population, she said. "The impossible has been made possible in India."

"We established scientific and technical institutions which are the pride of the world; but what has Pakistan offered to the world and indeed to its own people apart from terrorism," she asked.

India produced scholars, doctors, engineers, she said, and posed a question to the Pakistani leadership, "What have you produced?"

She answered, "You have produced terrorists. Doctors save people from death, terrorists send them to death."

She said the old UN resolutions from more than half-a-century ago have been overtaken by events and bilateralism was the only way forward.

The 1972 Simla Agreement between Prime Ministers Indira Gandhi and Zulfikar Ali Bhutto resolved that they would settle "all outstanding issues bilaterally, and Abbasi and the Islamabad leadership has forgotten it, she said.

From the moment he was sworn in, Prime Minister Narendra Modi had "offered the hand of peace, and friendship," and followed it up with the 2015 agreement with then Prime Minister Nawaz Sharif to hold "Comprehensive Bilateral Dialogue" that excludes third-party involvement that Abassi seeks, she said. 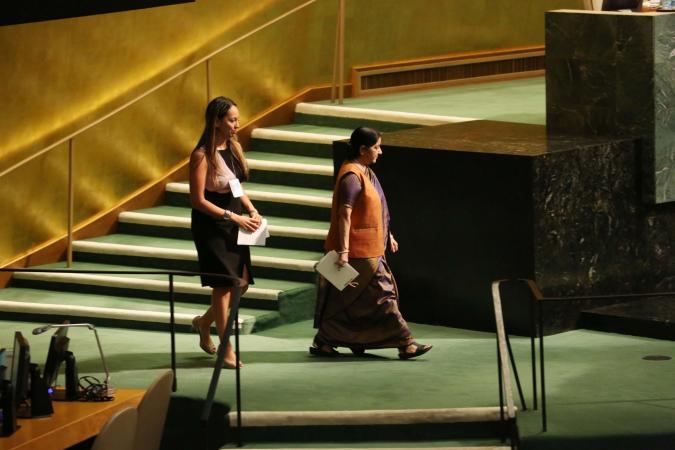 Turning to other vital topics, she called for text-based negotiations on the reform and expansion of the Security Council.

More than 160 nations supported it and "if we are serious, then the least we can do is produce one text that can be the basis for negotiation".

Climate change was one of the "significant dangers to our existence," she said and reiterated India's deep committed to the Paris Accord.

In a dig at President Donald Trump that India had been given inducement to sign the agreement, she said India "is deeply committed" to it "not because we are afraid of any power, influenced by friend or foe, or tempted by some imagined, greed" but because it "is an outcome of a philosophy that is at least 5,000 years old".

She added that the developed nations have more capacities and "must help the less fortunate through technology transfer and Green Climate Financing - that is the only way to save future generations."

(Arul Louis can be contacted at arul.l@ians.in)